Stephen Beili of Studio Beili hopes to design a green brothel in the future, or so he said when we sat down to talk recently.

Stephen is an award-winning home designer in Santa Fe. Green Star Builders had the opportunity to build one of his designs in 2014 and we weren’t surprised when that home won the Best Design award in the Haciendas – a Parade of Homes homebuilders’ showcase.

We were enjoying a moment of freewheeling brainstorming of how to take any design challenge and make it green. Those fun and free moments happen often when working with Stephen. Because there is a rumor that Fallingwater’s owner’s butler ran the house as a brothel when his boss was away, Stephen’s off-the-cuff comment about the brothel led to a discussion of Fallingwater and Frank Lloyd Wright.

SB: When I was in college, of course we studied Frank Lloyd Wright (FLLW). I didn’t get excited about FLLW because he seemed too commonly popular and [as students of the profession] we had to like something that was more obscure. Also, he was the inspiration for Howard Roark in Ayn Rand’s The Fountainhead, and I knew enough about that book to get the general gist of it; I did not let myself read it until about 10 years ago because I knew that it would fan the flames of “I’m special. I’m the architect. I should tell you how to live” and I was not planning to be that kind of designer. Then I read it in 2006 when I felt strong enough in how I ran my career. At the same time I was reading a Buddhist magazine. I recognized that Ayn Rand and Buddhism had a lot in common. We think about Ayn Rand as being so egocentric and being all about the individual and Buddhism being more gentle and open to the whole world and everybody’s wonderful and all that. But both of them put forth that we cannot let ourselves to be distracted by everyone else’s drama. We really have to separate ourselves, detach from that drama going on around us and stay true to ourselves and to our goals for what we are here to do. They’re very clear about that – both versions of truth. I was excited enough about that when I read The Fountainhead that I got a comprehensive book about FLLW’s work and I read it cover to cover. Then I planned a road trip across America to see his work and that of other architects as well.

I like things that FLLW brought forth seemingly out of nowhere. I’m still on the path to NOT being the designer who tells people how to live; I want to give them options.  But I love FLLW. I don’t like the gooey stuff he was doing late in his career, but I applaud him for doing it so late in his career and at 70 years old and coming up with new stuff. I like the planar forms he would do – wing walls. I like the wall of windows that wrap corners. I like to take ceilings down so that I can lift them up for effect.

He was clear about his vocation and his place in this world and he went for it. In some ways he went for it to the detriment of his clients, but sometimes he took them to a place that was pretty magical. For the most part he was just true to his vision, whereas I got distracted by Christianity, being gay, and then social causes that weren’t really mine to solve. 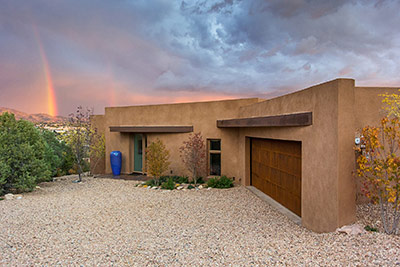 KH: Can you describe the thrill of designing homes and what keeps you doing it?

SB: One aspect is even from the days of being a child and designing house after house on my sofa with the Brady Bunch on without paying attention to it (three times a day because I was in Atlanta and we had Ted Turner before anyone else), I could create this fantasy world where everything made sense. My childhood was not terribly disruptive, but there was enough going on that was out of sync.  So going into this world where I could create beauty and spaces that were comforting and expansive was a really good rush. There is still that pleasure that comes from creating order, harmony and beauty out of everything that is around us. Knowing that I’m giving my clients the opportunity to find that in their homes, that’s super. That’s still the role that I have and what I get out of it.

I’ve had clients tell me that I was able to give voice to things that they have wanted and felt creative about but didn’t have the tools to be able to put down on paper and then see built. So I was helping them be creative in a way that they didn’t know how to be.

KH: Where do you start?

SB: Once I get the information that I need from the clients, then I go into a sort of trance looking at architecture books that may have nothing to do with the thing that we are trying to do. It’s just a chance to get me over to the right side of the brain. It can also happen out on the site where I just stop, maybe I have some music playing in my ears and I just begin to dream. Ideas come to me and I start sketching and going back and forth between right brain and left brain and thinking about sizes of rooms and all that stuff. It starts in a bit of a trance with the phone and computer turned off.

SB: Kiri Te Kenawa’s Verdi & Puccini album that I bought when I was living in Galisteo. It’s often been the album that I play when I am starting out on a new design. It’s such beautiful music and it takes me to a really good place. Music keeps me from the jitterbug aspect that pulls me in different directions. It focuses me.

SB: Owen. He’s living large. I can see him running a green and sustainably-built brothel.