The new home Green Star Builders designed with the owners of a beautiful hillside lot in Santa Fe required huge retaining walls. Instead of the typical block and concrete wall, the owners chose to do this with very pleasing squared-off boulders stacked in a brick-like fashion. This style is a specialty of Santa Fe excavation subcontractor Mark Lopez Development. Much of the rock is fantastic looking and a majestic scale:  30 inches tall, three feet deep by eleven feet long

On one of their deliveries, I met Curtis, Cory and Russell from Pacheco’s Wood & Rock who were mining all of this rock from the land grant in Tecolote. I told them that we needed to find large “character” moss rock boulders, including some for a large water feature in the back courtyard. They invited the landscape architect, Lee Klopfer, and me out to the land grant to scout for boulders. It turned out to be quite an off road adventure. We drove across a small river in our trucks and then we scrambled along a large hillside investigating and evaluating moss rock boulders, some of them as large as a truck.

Lee and I felt like kids in a candy shop. We picked out several very nice boulders for the project, photographed them, measured them, and made drawings of them to see if they would work when we got them back to civilization and could superimpose them on our plans and see if they would work with the scale of the building. One boulder in particular we saw and fell in love with right away, but we assumed that there was no possible way to get it. Lee and I told the men from Pacheco’s that if it was possible to get this we would really like it. 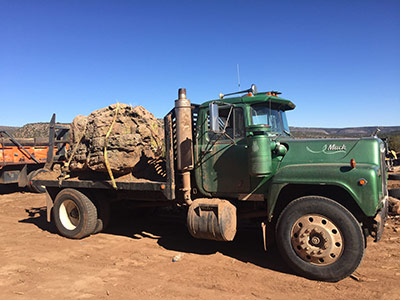 A couple of weeks later they called to let me know that they had the rock for me and that they had retrieved the massive boulder, which filled the entire back of a dump truck. They were not able to lift it with two different large excavators so they ended up digging a shelf next to it, backing the dump truck up to the boulder, and with both machines pushed it into the bed of the dump truck. It weighed between 22 and 26 thousand pounds. It was roughly eleven feet long. I was extremely excited that it would be possible to work with this stone.

The owners, Lee and I all wanted the boulder to look like a natural part of the landscape.  One of the hillsides we excavated on the jobsite turned out to be solid granite. Instead of building a rock retaining wall in front of it, we decided that it WAS the rock retaining wall. There were beautiful veins of red and green running thru it and no one wanted to cover it up. We decided to inlay our 20 plus-thousand pound boulder into this wall. This required me to use all of the experience I have at inlaying materials – this time at an enormous scale. 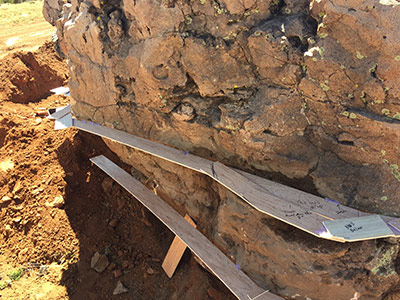 template of the boulder

I went back out to Tecolote, took pictures, and made a template the base of the boulder with plywood strips so I had the exact shape of the back of it at several different levels of height. I sent pictures and explained what I wanted to do with the boulder to our wonderful clients, who were very excited and gave approval right away.

Back on the construction site, I started with my concrete saws, a jackhammer and templates and then brought in the help of the excavator with its jackhammer arm and started to excavate the spot for this boulder. Not only did the boulder need to fit almost seamlessly into the rock wall, it had to sit well in the base so that it would flow properly when it was eventually plumbed for water. I had to estimate the angle for the base so that the finished fountain would be all we hoped it could be. 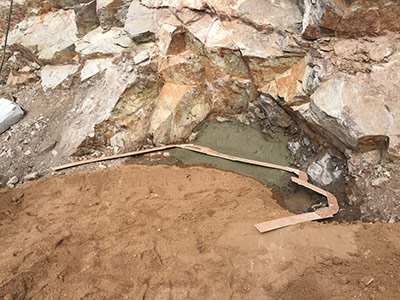 template of boulder in desired position

Throughout the following week, I studied the boulder and tested it by putting a hose in various spots to find where the water would flow. After, I drilled four three foot long holes with a masonry drill bit and snaked Wirsbo flexible plumbing tubing up behind the boulder to those holes, brought all that up to a manifold below grade with ball valves on each line so that they could be adjusted for flow, and tested it out. From four different water outlets, the streams split up into nine different waterfalls, one of which actually came thru a small tunnel in the boulder. Then proceeded to work very small pieces of the boulder (that I took off of the back side so that the moss would match) and added these pieces to the water flows at key positions to balance out the flow so that the amount of water went to various locations I wanted them to go from each individual spouts. It was everything I hoped it would be.

The next step was to prepare the ponding bed. I put down a layer of mortar to smooth out the broken rock, and then spread a layer of sand on top to cushion everything. On top of that, I put down two different ¼” thick rubber pond liner and added more sand on top. At this point, our site was ready for the boulder.

About a week later we had a small crane and a dump truck bring the boulder on to the job site. Both the crane and the truck operators were intimidated when they first saw this rock. I had to convince them that it met their weight specs and they could both lift it and carry it. Eventually both agreed and brought the boulder to the jobsite. Lee Klopfer and I directed the crane operator to very carefully set the boulder into its prepared bed. The crane operator builds fountains all the time; it is what he does. At this point he said that it was set perfectly – as good as it could possibly be set. 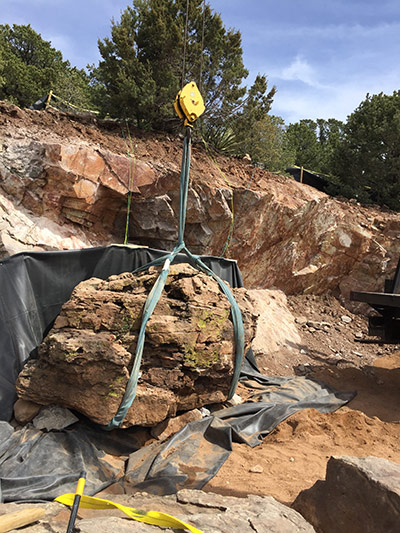 We looked at it. It was very hard to see because you couldn’t get onto one side easily. We allowed him to detach. He was packing up when we were able to carefully inspect the boulder and I noticed that it was not tight to the rock hillside and that my inlay work was not being utilized to its full potential. There was a much larger gap than there needed to be between the hillside and our boulder on one side. I talked to Lee about it and it bugged us. I told the crane operator that we were going to have him move it again. We managed to get straps around the boulder again, lifted it, wedged it into place with large fulcrums and levers and had him set it down. At this point I could not fit my hand in between the natural granite and the imported moss rock boulder. We left room in a few areas behind the boulder to fill in with soil and plant with native grasses so that the boulder looked like it belonged.  It was really rewarding and the results… make me happy.